Lesson 12: Flat Foot in the Ashes

Flat Foot in the Ashes

The source for this tune is the recording Augusta Heritage LP AHR 004 (1986). Sampson’s fiddle is cross-tuned, and the tune is modal.

“I was playing the old-time music. There’s a style that the old folks had, that they ain’t using today.” —Harvey Sampson 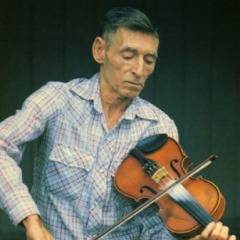 Harvey Sampson (1909-1991) was from Nicut, West Virginia on the Calhoun/Braxton county line, an isolated area with a “wild and woolly reputation” and a distinctive collection of crooked, modal old-time Appalachian tunes. Harvey was one of seven children, born into a family of singers and musicians. His father and brother were fiddlers, and Harvey started out by accompanying them on banjo as a child, learning from his father a repertoire of over one hundred traditional “twisty, crooked, or even spooky” tunes that included “Flat Foot in the Ashes.”

The Sampsons often made their own instruments. In a recording in the West Virginia and Regional History Collection’s Sound Archives, Harvey said that “his father and other local fiddlers shaped maturing gourds on the vine [to make homemade gourd fiddles] by placing them between a pair of boards.” Harvey himself made his own banjo when he was eight years old:

“I put this flour sack bag [across a banjo hoop] and cut me out a head. Later on I figured out where those notes was supposed to be and I took wire and put frets on that. I don’t see hardly how I done it, ’cause I didn’t know hardly what I was doing.”

After spending his childhood and teenage years as a banjo player, Harvey began playing fiddle during World War II when he took a job building aircraft in Maryland. When the war ended and he returned to West Virginia, however, he focused on farming, finding little time left for any instrument for the next fifteen years. Eventually a nearby musician, Phoebe Parsons, went looking for someone who could play authentic old-time music with her. She found Harvey, he picked up his fiddle again, and the two musicians began performing together.

A few years later, younger musicians began seeking Harvey out to play music with him and to learn his unique and historic style of playing. In late 1984, when Harvey was seventy-five, he joined some of these younger musicians—fiddler Frank George, banjo player Larry Rader, and guitarist Charlie Winter—in the Big Possum String Band. The band recorded a seminal album of fiddle tunes titled Flat Foot in the Ashes in 1986 and inspired a later band to perform under the same name.

Harvey died in 1991, but not before he ensured that the music of his family and home would live on.“Boy, when you get a chance to hear Harvey play, you’re hearing the real thing.” —bandmate Larry Rader

Info on Harvey and his father, brother, and birthplace – Play of a Fiddle: Traditional Music, Dance, and Folklore in West Virginia by Gerald Milnes, 1999

Full tune list from Harvey Sampson and the Big Possum String Band’s album Flat Foot in the Ashes. There’s information about Harvey in the recording’s liner notes, which can be found by clicking “More Images.”

Footnotes on this page of the Musical Traditions magazine website include information about the Sampson family’s homemade gourd instruments.

need to be clicked on and opened in Youtube before viewing.

The Big Possum Stringband play the tune at the Vandalia Gathering:

The Big Possum Stringband play Train on the Mountain at the Vandalia Gathering:

Sampson playing Minnow on the Hook with Phoebe Parsons on banjo (video focuses on banjo):