This sweet little tune, with very few notes, is an excellent opportunity to practice your bow circles.  The A part in particular utilizes bow circles on top of the shuffle, meaning your circles change direction.  Both parts of the tune end with “and a jenny run away” or “circle, circle, bow rock”.  Exaggerate your bow circles.  Pay attention to the sound of your drone string ringing out.  Bouncing on that drone is going to double your rhythm.  Smile.  If you are having fun then it’s working.

These lyrics go with the tune:

Shot him on the wing;

I got a banjo,

Listen to it sing.

“Kentucky’s funny, because it had an incredibly strong music tradition, and it kind of has this mystique, and yet it never really got discovered much. A lot of bluegrass and country musicians came out of Kentucky, but as far as their old traditional music, so little of it really got any attention paid to it until it was almost gone.” -Bruce Greene

Arville “Sandy” Sandusky was a fiddler from the town of Liberty in Casey County, Kentucky. Although Bruce Greene recorded several of the tunes he played, little is known about Sandusky himself. His home state still recognizes his contributions to old-time music, however; on the Eastern Kentucky Arts Project’s website, he is the sole artist featured as part of Casey County’s historical musical recordings. 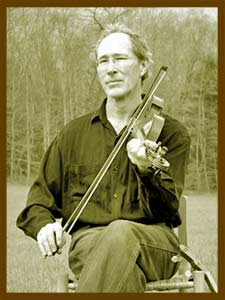 Bruce Greene, the multi-instrumentalist and folklorist who recorded “Sandy” Sandusky and many other Southern fiddlers, currently lives in Yancey County, NC and speaks longingly of “the days when rural fiddling was still passed down through the generations as a living tradition.” He himself, though, didn’t grow up in the rural South learning from a musical family—he was born in New York City and lived in New Jersey until his twenties, learning to play banjo and guitar by listening to whatever folk records he could find.

Bruce’s passion for old-time music and culture eventually led him to leave New Jersey and move to Kentucky, where he would live for most of the 1970s. “I was thinking about being a folklorist,” he told an interviewer in 1997. “I wanted to go somewhere in the south, because I liked the music — and there were very few schools where you could take folklore classes on an undergraduate level. […] Western Kentucky University was one where you could study it as an undergraduate. So I just kind of took that name out of a hat, really, and went down there without knowing what I was getting into. It turned out to be a really good experience.”

A few of Bruce’s professors shared his enthusiasm for old-time music, and one of them, who had grown up in Kentucky, helped him to get in touch with traditional musicians who lived in the region. Soon Bruce was visiting and learning from a variety of Kentucky fiddlers; instead of working as a general folklorist, he realized that his greatest passion was documenting and playing old-time music. 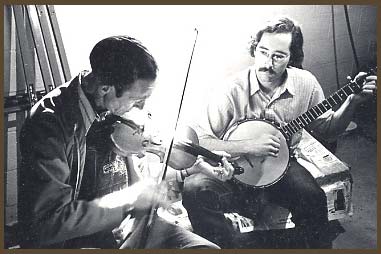 As Bruce searched for musicians, he realized that old-time fiddling, “as a tradition, was really on the decline. […] Much of Kentucky in the 1970s and ’80s was just such a mix of the past and the present, and by that time most of the traditional music had slipped quietly into the background of people’s lives.” Many of the people Bruce met were more likely to play newer bluegrass music than old-time tunes, more likely to learn tunes off of the radio than from someone they knew.

“You really had to beat the bushes to find the old people who knew the old-fashioned stuff, which was what I was after. […] There were some that were still playing actively more or less, and they were glad of anybody to get together with. But then there were a lot of people, the real old guys, that quit years ago, had just kind of forgotten about it, and I had to push them a lot to get them to play. Like the first time I’d go there they wouldn’t play, wouldn’t play, wouldn’t play, and I’d come back again a month later, they’d feel like playing that time. I think part of it was just not being sure about a stranger. So they’d wait and see if you were going to come back and weren’t just somebody passing through.”

As Bruce built relationships and began learning and recording fiddle tunes, he discovered that the culture surrounding the region’s old-time music, despite changes, had not been forgotten by the fiddlers he played with.

“With a lot of the fiddlers I’d get together with, they always said they hardly played at all except when I’d come around, and then we’d play the old tunes. […] The past was never far away. They seemed to have endless tales and reminiscences concerning the music and where it came from and who were the great players of olden times. Their reverence for the antiquity of the music and the fiddlers from past generations was always fresh in their minds.” In 1978, Bruce moved to the Toe River Valley community in Yancey County, western North Carolina, where he continued to seek out and learn from traditional fiddlers, and where he lives today. “I try to honor and keep alive their music through my recordings and occasional performances,” he says of the many musicians who have influenced his playing. His latest CD, “River in Time,” contains twenty-four tunes he has learned from regional musicians during his forty years of living in western North Carolina. He performs solo and with musical partners and teaches fiddle workshops throughout the Southeast.

“To love Kentucky fiddling is to have a romance with the past. It is music that is intimately tied to the land and a rural way of life that has now mostly disappeared, but lives on in the colorfully named tunes and equally colorful characters who have passed them down to us.” -Bruce Greene

Other tunes from “Sandy” Sandusky:

Shoe Heels Crackin’ on the Floor by Bruce Greene

Jonah in the Windstorm by Bruce Greene

Going Across the Sea by Bruce Greene