Back to: All-Access Fiddle Course

Welcome to Lesson One of the Art of Bowing.

When learning anything for the first time there are a hundred things to pay attention to and trying to pay attention to all of them can really slow down the learning process.  We are going to start with just few and add more awareness’ in with each new tune.  For now I just want you to focus on three things:

The Saw Strokes are the first of what I consider the 5 foundational rhythms of Old Time music.  I want you to play it until you can’t stand it anymore in order to build your muscle memory.  Sing the mnemonics as you bow the tune, it  will drastically increase your ability to remember the rhythm.  Pay attention to which words land on the down beat.

Cross G tuning is one of many “open” tunings that were used by southern fiddlers to create the distinctive drones and rhythm patterns that define Old Time music and distinguish it from other fiddle styles.  Learning to play in open tunings is essential to building fluency in this style.  It will take some getting used to due to the slightly different location of certain notes on certain strings but you will quickly realize that it is actually easier and more forgiving than playing in “standard tuning” (GDae) due to the ability to hit any string and let it ring out in a harmonically pleasing way.

3. Playing on two strings at once

Why Begin in Cross G tuning?

Many people come to me with a background in classical or bluegrass music where they have played exclusively in what is known as Standard Tuning (GDae). Southern Appalachian fiddlers often played in alternate “open” tunings. I have consciously chosen to start my students in one of these alternate tunings, Cross G (GDgd), for the following reasons:

Give Me a Chaw of Tobacco

Give me a Chaw of Tobacco, a variation of the well known tune “Sally Goodin”, is played on this recording by The Carter Brothers and Son from Monroe County in NE Mississippi.  It was recorded in Memphis, TN onto a 78pm record in 1928 by Vocalion Records

The Carter Brothers and Son band—brothers Andrew and George and George’s son Jimmie—were from Monroe County in northeastern Mississippi. George was born about 1869, and Andrew probably in 1878. George and Andrew were primarily cotton farmers, and Jimmie spent most of his adult life working as a well-digger and truck-driver, but due to their love of music, they were also lifelong musicians and performers. Their sound is some of the wildest in that era of recorded old time bands with their driving twin fiddles which sometimes gets out of sync from each other, nonsensical vocals that become another instrument, and the amazing guitar runs. 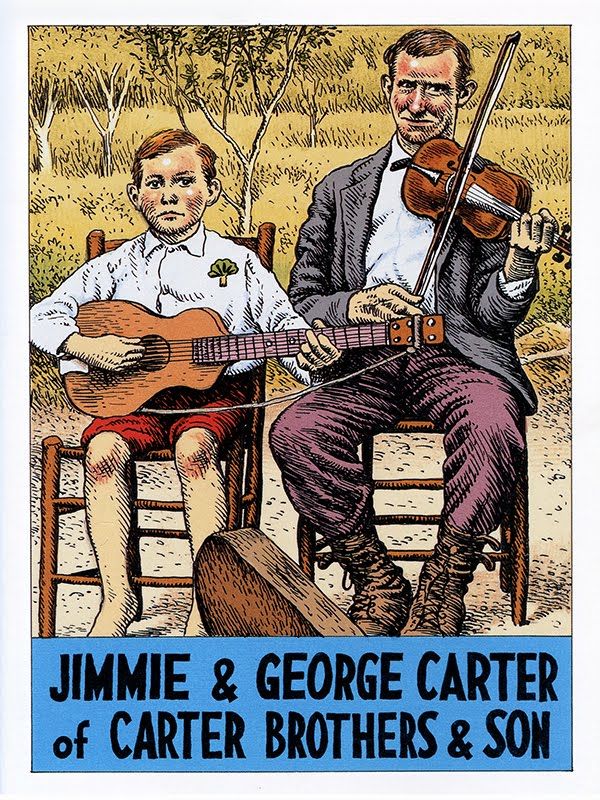 George and Andrew Carter both played fiddle, but the brothers had very different styles. George specialized in fast-paced old-time tunes and was a sought-after performer at local dances; he also frequently won prizes in local fiddle contests, including at least one gold medal. Andrew “played the violin,” according to his nephew Jimmie;  “he wasn’t no fiddler.” He preferred waltzes and slower tunes.

When Jimmie was seven, his father George began teaching him to play guitar. Jimmie picked it up quickly; by the time he was eight, he was joining his father to play for their community’s frequent dances. “We’d go through the winter time, from the time folks gathered in the corn […] to early spring,” as Jimmie remembered; people took turns hosting dances at their houses, and sometimes there was a dance every night.

Jimmie played so hard he “beat a hole in about four or five” guitars over the years, and he often ended up with “gashes […] plumb to the bone nearly” on each fingertip from hours of playing on strings that were too high off the fingerboard. Even with his energy and stamina, he couldn’t always keep up with his father. If George was “feelin’ pretty good, he’d sit down over there in that corner, hang that head over that fiddle, he’d play two hours at a time and never stop.” Sometimes Jimmie would “punch him so he’d quit, you know, so we’d take a little break.”

Whether from those dances or from George’s fiddle contest performances, word got around about the Carters’ musical talent. Starting in the spring of 1928, a record company began driving the Carters to Memphis to be recorded. The Carters agreed to several trips, but they declined an offer to travel to Europe, since Andrew thought that would be much too far from home.

From the records they made, the Carter Brothers and Son band became known for George’s “mouth music” or “diddling”—singing nonsense syllables instead of words. As it turns out, this was only because of a fluke with the recording equipment. Andrew Carter, George’s brother and Jimmie’s uncle, was known for being able to sing and play fiddle at the same time; he didn’t play much dance music, preferring to sing songs and accompany himself on fiddle. George and Jimmie wanted Andrew to be the main singer during their recording session. As Jimmie remembers, “[Andrew] could sing. ‘Bout the first feller I ever saw could just sit up there and play the fiddle and sing all the same time. […] But the lil old microphone wouldn’t take his voice at all. And well, [the man from the record company] asks my daddy, ‘Can you sing?’ […] He says, ‘Oh, I can sing a little few words, holler a little.’ ‘Well,’ they said, ‘you go ahead then and you sing and just holler ‘n’ hoot and do anything you want to.’ Well, my daddy did that, you know, and course that suited them all right.”

Jimmie remembers taking a casual attitude toward the series of recording sessions—“didn’t think there was anything to it or they were worth anything,” he said—and was surprised later on to find out that “them records went everywhere” and that people from all over had bought and enjoyed his family’s music.

Had a little dog and his name was Rover

When he died, he died all over

An important thing to understand here is that I am not teaching you how to fiddle the tune the way the Carter Brothers fiddled.  I am just using this melody to teach you the first foundational rhythm – the Saw Strokes.

Here is a recording of the Red Hots, a popular NC band from the 1990’s playing Give Me a Chaw Tobacco

Here is another tune, Nancy Rowlands, by the Carter Brothers and Son