Lesson 4: Jenny Run Away in the Mud in the Night and “Stay Out Tonight Won’t You Come Out Tonight” bowing pattern

This bowing rhythm is the most challenging of the the first five foundational rhythms that I teach.  It is very syncopated which creates slurs in strange places.  This rhythm is omnipresent and very important in old time music so you really want to focus on learning it well before you move forward with other tunes.  It will come up a lot as you move forward.

Jenny Run Away in the Mud in the Night

From the collection “When I Get My New House Done – Western North Carolina Fiddle Tunes And Songs”, released in 2007 by the North Carolina Folklife Institute at UNC Chapel Hill. Recorded in the 1940’s.

The first line was originally “in the middle of the night,” but a mishearing has produced “mud in the night.” Similarly, the phrase “barker at the fair” was originally “jockey to the fair,” the title of an old British Isles song of the same name. A Gloucester-collected version begins: 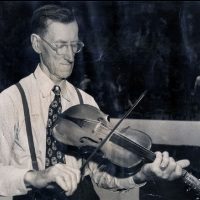 Marcus Martin was from Macon County, NC. He lived from 1881 to 1974. Growing up farming, he learned to play fiddle from his father, Rowan Martin; he then worked a series of odd jobs around WNC (logging, textiles, postal service, etc). Throughout his life, Martin played square dances around Macon and Cherokee Counties, accompanying Bascom Lamar Lundsford and others; he was featured for many years at Lunsford’s Mountain Dance and Folk Festival in Asheville. Martin’s fiddle style makes heavy use of cross-tuning (GDGD, GDGB, DDAD, GDEB or GDAD). He also played banjo, harmonica, and mountain dulcimer.