Lesson 18: Old Chattanooga and Starting on the Up Bow.

About the tune: This tune likely originated in the Walden’s Ridge / Sequatchie Valley area. Blaine Smith, the fiddler in this 1977 recording, learned the tune from Bob Douglas in the 1920s. It was also known to other fiddlers and bands in the area.

“The hills and hollows of Walden’s Ridge and the Sequatchie Valley stretch northeast from Chattanooga toward Knoxville in a bewildering pattern of rugged terrain and isolated grassy valleys. Though the mountains are not as spectacular as the Smokies further to the east, they have their own beauty; and though their culture is not as well documented, it has its own richness and variety. This is especially true of the music of the area.” -professor and music historian Charles Wolfe

It was in these mountains, near Chattanooga, TN, where Blaine Smith (1915-1997) spent most of his life. He started learning fiddle from his mother and uncle as a child and could play well by the age of ten. In his early days of playing, “I didn’t have no bow,” he recalled. “My mother had a fiddle and a bow, with no hair. I just had the stick. I scraped all that paint off of it, rosined it up, that’s the way I learned to play.”

As an adult, Blaine played a viola that he’d gotten in exchange for helping to tear down a house. He tuned it to violin standard tuning, resulting in a powerful sound. “The strings were a good half inch off the fingerboard,” an observer marveled. “It took a powerful grip to press the strings solid to the fingerboard to get a clean sound. Blaine played the instrument effortlessly.”

Later in his life, Blaine Smith teamed up with his mother-in-law, lifelong banjo player Florrie Stewart, and her son, guitarist Willie Brandon. They played at nearby square dances for many years and also played together at home just for fun. Their playing was typical of the local “Chattanooga style”: fiddling focused on simple melodies rather than on ornamentation, backed up by “basic, loping rhythm guitar.” For Blaine, this was an intentional musical choice; he told interviewers that he “despised” hearing fiddle tunes in which fiddlers improvised excessively or “put other stuff in there.” “That’s what’s wrong with these modern fiddlers today,” he said. “I play them straight, the way they’re supposed to be.”

We know about Blaine’s playing – and his strong musical opinions – largely thanks to the Pine Breeze Recordings project, conducted by a residential high school for “emotionally disturbed” teenagers. The project, proposed by teacher and counselor Ron Williams, received a grant from the Tennessee Arts Commission to record and produce their first LP; they used proceeds from its sales to record later ones, releasing eight LPs of traditional music played by people who might never otherwise have been known or recorded.

“I really had not thought deeply about this whole idea,” Ron Williams wrote after the fact. “I had naively assumed that we would easily find local traditional musicians, who had been waiting anxiously over the years for a group of emotionally disturbed adolescents and their longhaired teacher to pull up in a State van in their front yard to record their performances of fiddle tunes and ballads passed down through the centuries. Amazingly, it turned out that this was what happened. […] These recordings presented here are proof that there is magic in the music.”

The project came to include Blaine Smith’s music by pure chance, when Ron Williams got lost while looking for the house of another fiddler and stopped at a house to ask directions. “As I knocked on the door,” Williams recalled, “I thought it nice that the residents were playing some old-time record on the turntable. The music stopped when Florrie Stewart opened the door, banjo in her hand. Somehow by sheer cosmic fortune, I had stumbled into 1889.” Williams, who could play a little clawhammer banjo, asked to play a few tunes with Florrie, Willie, and Blaine, and this initial encounter paved the way for him to return with his students to include this musical extended family in their recordings.

These improbable recordings, made by teenagers with secondhand equipment, ended up becoming surprisingly valuable, both as historical records of obscure regional fiddle tunes and as inspiration to old-time musicians of many decades to come. Many years after the recording project’s completion, Ron Williams “discovered that several of the Pine Breeze recordings of Blaine had become popular with a younger generation of old-time musicians, particularly on the West Coast.”

While we don’t know if Blaine would think his tunes are still being played “the way they’re supposed to be,” hopefully he’d be pleased by the impact he, his family, and their musical community have had on old-time fiddle players of today.

“All too often we hear today that the genuine old time music is all but extinct in the grass-roots South, that it is played only by folklorists and self-conscious revivalists. Here is proof to the contrary – proof that at least some of the wellsprings of traditional music still flow.” -professor and music historian Charles Wolfe’s thoughts about the Pine Breeze Recordings 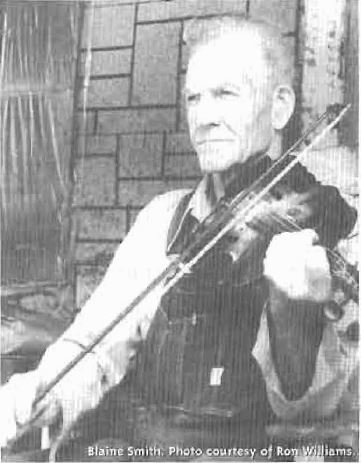