This tune is an opportunity to experiment with making rhythmic and melodic variations on the fly as well as adding chords into the mix.

On the beginning of the A part you can add the “and a look away” bowing ornament and then land on the C chord on the low strings.

On the B part you can do the melodic variation I teach in the video on the low string and then land on the D chord on the middle strings.

I like to trill on the A string whenever possible on this tune.

For fun, try playing the A part only on the two low strings.  You may choose to adjust the melody notes.

This track was released on the Stuart Brothers album Pretty Little Widow on Yodel-Ay-Hee Records in 1997 and features Rayna Gellert on second fiddle. My memory is that Trevor said he wrote this tune as a lullaby for one of his children. 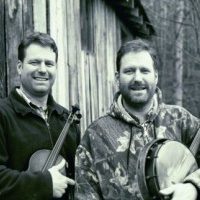 Trevor Stuart, along with his twin brother Travis were born and raised in Bethel , a rural farming community in Haywood County, NC   where the Blue Ridge and Great Smoky Mountains meet and once the ancient Cherokee settlement of Sonoma.  They learned to play oldtime mountain music as teenagers from members of their community and surrounding counties, including Gordon Freeman, the Sutton family, Byard Ray, the Smathers Family, and Red Wilson.

In the 80’s they began to attend fiddler’s conventions where they found themselves as some of the only young people playing old time music along with Riley Baugus and Kirk Sutphin. 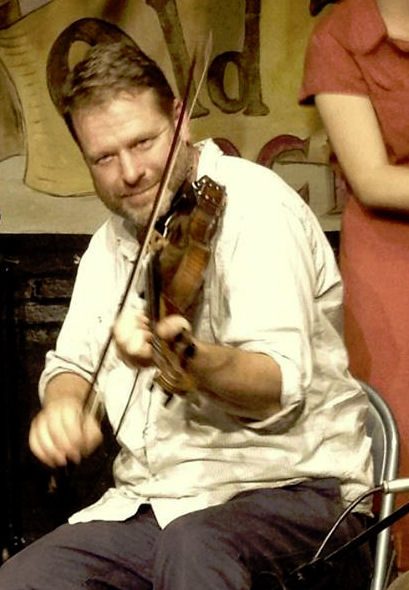 The Stuart Brothers became a touring band and played for dances, festivals, music camps, and concerts all through the United States, as well as in England, Ireland, Germany, and Russia. They recorded two albums, and have appeared on many other musicians’ recordings.

As residents of Haywood County they were very active and well loved in the nearby Asheville, NC old time music scene and taught for the Junior Appalachian Musicians program in Haywood County.

Trevor wrote a tune for his great-grandfather Henry King: “I named this reel after our great-grandfather Henry King, born 1856, who was a fiddler, Methodist preacher, mortician, and a barber, among other things I’m sure. My Grandmaw Myrtle King Stuart told me many stories about him: how he’d cut every dead man’s hair in Sandy Mush. The stories about him staying up all night and playing for dances inspired me to play fiddle.”

Biscuits and Gravy AKA Chicken and Dumplings

Paddy on the Handcar

Full Concert in CA with Riley Baugus and Sabra Guzman